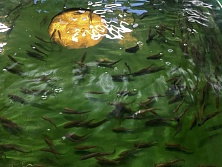 As a part of the program for the restocking of aquatic biological resources, by the request of the Company, fish fry were raised at the Vygskiy fish hatchery of the Federal State Budgetary Institution «Glavrybvod». Whitefish fingerlings were delivered to the place of release by special vehicles.

The fingerling stocking took place under the supervision of representatives of the Company and the North-West Territorial Administration of the Federal Agency for Fisheries. The event was carried out by specialists from the Vygskiy fish hatchery of the Federal State Budgetary Institution «Glavrybvod».

Responsible attitude towards the environment is a priority for Russian Aquaculture in the implementation of commercial cage farming of rainbow trout in cage farms in the Republic of Karelia. The Company's production activities are carried out in strict accordance with environmental legislation and the principles of sustainable development.

Russian Aquaculture is a leader in the production of Atlantic salmon and trout in Russia.

The Company’s core business areas are:


Russian Aquaculture’s core strategic focus is on developing its aquaculture business. The Company currently owns cultivation rights for 39 sites for farming salmon and rainbow trout. The total potential production volume for these sites is around 50 ths tones of salmonids.

The Company’s long-term development strategy involves the creation of the largest vertically integrated player in the aquaculture market, including the production of feed and stocking material, primary processing, and distribution of the Company’s own products.